This isn’t just any old bread, it’s filled with the sweet warm flavours of maple and cinnamon and the crunchiness of chopped almonds and flaked coconut…packed with flavour and it’s mouthwatering delicious! It’s well worth the effort!

In a medium sized bowl add the yeast, 2 tsp of white sugar and the warm water and whisk.

Allow the yeast to froth up.

Put the butter and milk in a sauce pan and place on low heat until the butter is melted. Allow the mixture cool. It should be lukewarm before adding to the flour.

In a large bowl add the flour, salt, maple syrup, egg, yeast and warm milk and butter mixture. Using a mixer with a dough hook, mix well until all the ingredients have combined and continue to knead for about 5 minutes until the dough has an elastic consistency. If the dough is too wet add a little flour so the it comes away from the sides of the bowl when mixing it.(Alternatively, combine with a wooden spoon and knead by hand.)

On a large piece of clingfilm, brush a little vegetable oil and cover the dough in the bowl. Leave in a warm place for about an hour until it has doubled in size.

In the meantime combine the filling ingredients in another bowl, apart from the almonds and coconut and mix well.

Once the dough has proved, knock it back (pressing down on the dough to force out the air that has formed) either in the mixer or by hand. Roll out the dough on a slightly floured surface to approximately the size of 26cm x 26cm.

Now spread the filling mixture over the dough, allowing about 1cm border all around the dough.

Sprinkle the nuts and coconut flakes and roll the dough. Place the rolled dough on a baking tray covered with parchment paper. Using a sharp knife that has been brushed with oil cut down the length of the dough to produce 2 pieces that can now be braided together to create the lovely appearance of the twisted bread. Tuck the ends under and cover up again with the oiled clingfilm. Allow to rise for about 30 minutes.

Preheat the oven to 180C. Place the dough in the oven and bake for about 30 minutes until golden brown and done. ( Tap the bottom of the bread and if it makes a hollow sound it will be done.)

After 5 minutes of resting place on a wire rack and allow to cool.

Mix together the icing sugar and orange juice to give a runny consistency.

After the bread has cooled down, using a spoon, hold it above the bread to apply the icing with a back and forth action, to give a zigzag pattern. 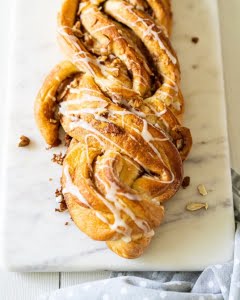