Pancake Day with the Chelsea Pensioners

You are here: Home1 / Pancake Day with the Chelsea Pensioners

Pancake Day with the Chelsea Pensioners 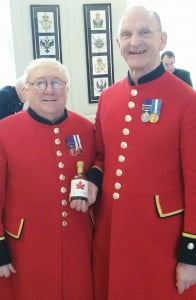 Pancake Day is a busy time for us and this year we had two big events lined up; a blogger’s breakfast in East London (more about that later) and the great honour of providing eighty Chelsea Pensioners, veterans and military dignitaries with maple syrup for their traditional Canadian breakfast in West London.

We started the day with a glass of Moose Milk – a traditional drink that dates back to the English and French Colonial times in Canada, when the Governor of Canada would conclude calling his subjects for news from the homeland with a drink of wine. The wine, coming from Europe, did not travel well on the long ocean voyage to Canada so would be mixed with other forms of alcohol, flavoured with spices and goats milk added. Today moose milk is still drunk by the Canadian services but each recipe is slightly different and a closely guarded secret by each Regiment!

The Deputy Commissioner flipped the inaugural pancake and the Pensioners were led into their wonderful NAAFI ‘mess’ bar, where they all tucked into a real Canadian breakfast of bacon, eggs, beans, toast, pancakes and of course a healthy dose of Pure Maple Syrup!

We had the chance to talk to many of the veterans who recounted their war and service stories, explaining the history behind the Chelsea Pensioners. In particular, CP Arthur who was 94 years old and told the story of his experiences during the Rhine crossing in WW2, a truly remarkable experience!

After a hearty breakfast we bid farewell to our new found friends and look forward to seeing them again next year!

Your personal data will be processed by PureMaplers Ltd to send you emails with updates regarding products and services in accordance with our Privacy Policy.

* / ¹ “FREE Delivery” or “FREE UK Delivery” = “FREE UK Mainland Delivery”, delivery to other parts of the UK such as Northern Ireland may incur additional costs seen at checkout.

This website uses cookies to improve your experience while you navigate through the website. Out of these, the cookies that are categorized as necessary are stored on your browser as they are essential for the working of basic functionalities of the website. We also use third-party cookies that help us analyze and understand how you use this website. These cookies will be stored in your browser only with your consent. You also have the option to opt-out of these cookies. But opting out of some of these cookies may affect your browsing experience.
Necessary Always Enabled
Necessary cookies are absolutely essential for the website to function properly. This category only includes cookies that ensures basic functionalities and security features of the website. These cookies do not store any personal information.
Non-necessary
Any cookies that may not be particularly necessary for the website to function and is used specifically to collect user personal data via analytics, ads, other embedded contents are termed as non-necessary cookies. It is mandatory to procure user consent prior to running these cookies on your website.
SAVE & ACCEPT