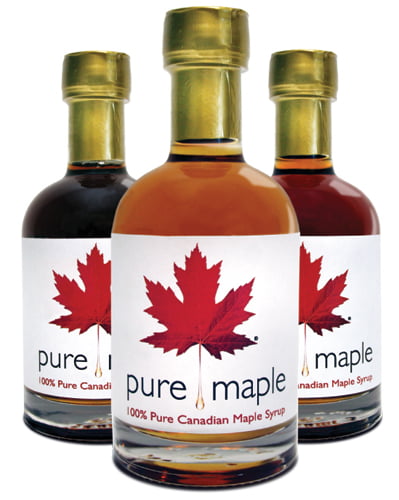 Working with a cooperative of experienced maple syrup producers in South East Quebec, Canada, Pure Maple is created using the traditional, manual ‘tapping’ process which can only take place during the six week harvesting season.

All Grade A quality, the Pure Maple range consists of…

• Delicate Taste Maple Syrup, ideal for glazing meats and root vegetables, as well as a sweet addition to cocktails or salad dressings.

• Dark Robust Taste Maple Syrup can be used as a sweetener in coffee or as a replacement for honey.

Packed full of antioxidants and nutrients, unlike many other syrup brands Pure Maple is free of colourings, artificial flavours and isn’t diluted with cane sugar, corn syrup or carob syrup.

ENDS September 2015
Issued on behalf of the Pure Maple by Leapfrog PR. Editorial contacts are Stephanie Whitmore or Georgia Clancy on 01242 282000 or email stephanie@leapfrogpr.com

Your personal data will be processed by PureMaplers Ltd to send you emails with updates regarding products and services in accordance with our Privacy Policy.

* / ¹ “FREE Delivery” or “FREE UK Delivery” = “FREE UK Mainland Delivery”, delivery to other parts of the UK such as Northern Ireland may incur additional costs seen at checkout.

This website uses cookies to improve your experience while you navigate through the website. Out of these, the cookies that are categorized as necessary are stored on your browser as they are essential for the working of basic functionalities of the website. We also use third-party cookies that help us analyze and understand how you use this website. These cookies will be stored in your browser only with your consent. You also have the option to opt-out of these cookies. But opting out of some of these cookies may affect your browsing experience.
Necessary Always Enabled
Necessary cookies are absolutely essential for the website to function properly. This category only includes cookies that ensures basic functionalities and security features of the website. These cookies do not store any personal information.
Non-necessary
Any cookies that may not be particularly necessary for the website to function and is used specifically to collect user personal data via analytics, ads, other embedded contents are termed as non-necessary cookies. It is mandatory to procure user consent prior to running these cookies on your website.
SAVE & ACCEPT